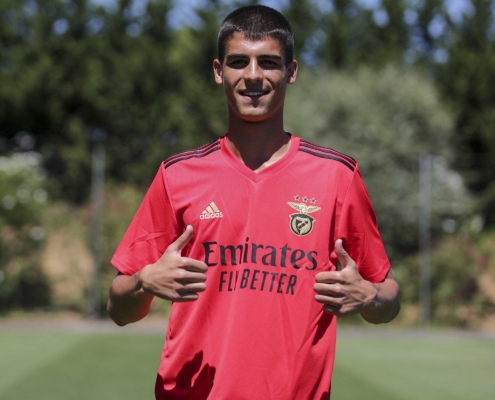 Kaloyan Kostov was born in 2004. He is notable for his football intelligence, his confidence in carrying the ball, his positioning and last but not least by his head play. At the age of 15 he was called up to the U19 National team of Bulgaria. He speaks several languages, including English and German, and has recently focused on Portuguese. Kaloyan is an example of how education and football can go hand in hand. He studied in one of the most prestigious schools in Sofia – the 73rd Sofia School “Vladislav Gramatik” (Second German High School).

Benfica fought for Kaloyan’s signature with a number of greats such as Inter and Juventus. The Portuguese club managed to win with its vision and its work with young players and the chance it gives them to make it to the first team. This season, Benfica’s U19 team played a final in the Youth Champions League, beating Liverpool 4-1 in the 1/8 finals, Dinamo Zagreb 3-1 in the 1/4 finals and Ajax 3-0 in the semi-finals. It is no coincidence that in the last 5 years Benfica has twice won the award for the best academy in the world. You can see more about the Benfica campus in the video HERE.

Here is a list of players who have gone through the Benfica academy for the last few years:

We hope that next to these names will be the one of Kaloyan Kostov. Many people will have the credit for this, and we would like to list some of them here. In the first place Rumen Galabov and Rumen Pavlov. Also Ivan Geshev, Andrey Andreev, Adrian Botsev, Lyubomir Bojankov, Ventsislav Velinov, Marcho Dafchev, Georgi Georgiev, Angel Stoykov, Teodor Tashkov, Hristo Arangelov, as well as the administration and management of FC Septemvri – one of the best academies in Bulgaria. Last but not least – Rumen Stoyanov and Evgeni Yordanov.

In the end, the team of Campionia wants to thank from the bottom of their hearts the whole family of Kaloyan for the trust in us. Kaloyan Kostov, Kalin Kostov, Vyara Kostova, Valentina Kostova – we love you and we will always be by your side.