The team of Al Markhiya (Qatar) spent 10 days is Sofia as part of their pre-season preparation. Campionia organized the whole camp. During their stay, the Qatari team played 2 friendly games. The first one was with the team of Vitosha,  won by the Bulgarians with 1:0. The second game was with Tsarsko Selo, which Al Markhiya won 4:0.

The Qatari team was very pleased with the conditions and promised to return again next year. The hotel provided Halal food, 3 natural and 1 artificial playing grounds, outdoor and indoor swimming pool, gym, rehabilitation center and shuttle for the airport transfer.

If your team is interested in a pre-season camp in Bulgaria, Campionia will be happy to organize it. Do not hesitate to contact us.

One of the most talented young strikers in Bulgaria Plamen Petrov will spend one week on trials in the Italian team Virtus Entella. The trials were arranged personally by Georgi Zahariev, who has strong contacts with the team competing in Serie B. If Plamen gets an approval, he will begin training with the Primavera of Virtus Entella (the team under 19). Last season, the youngster scored 20 goals in 29 games for his team in the U17 Championship in Bulgaria.

Accommodation and food during the trials are provided by Virtus Entella.

Turin, Italy – an amazing city with a long football history. Home of one of the most successful football teams in the world – Juventus. This May the newly built Juventus stadium hosted the biggest football transfer event in the world – Wyscout forum. More than 100 teams from all the globe gathered together to discuss transfers of players, future partnerships and of course to make a lot of contacts. The founder of Campionia, Georgi Zahariev, took part in the event and had a fruitful meetings with team officials from Liverpool, Girona, Juventus, Kaiserslautern, Virtus Entella, PSV, Gent, Gabala and many other clubs.

The founder of Campionia, Georgi Zahariev, participated in one of the biggest football transfer events this year. More than 60 club representatives and agents from England and other European countries took part in this invitation only event. It was organized by Tony Sharkey and his company Athelite. The event took place in Riverside Stadium, Middlesbrough, UK. Here is a list of some of the participants: 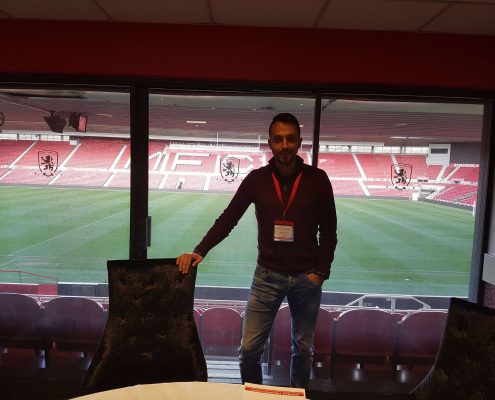 Georgi Zahariev during the forum at Riverside Stadium, home of Middlesbrough FC

Campionia is proud to announce our partnership with The National Sports Academy of Bulgaria. We are honored to be part of the future of Bulgarian sport. Campionia will be responsible for the marketing of The National Sports Academy in China and will try to bring students from the Asian country, as well as try to find sponsors and partners. Strengthening the connections between Bulgaria and China in the field of sport will be our top priority. We will try to organize sport camps in both countries, stimulate the student exchange and organize different tournaments and friendly games. Last, but not least, we will try to bring Bulgarian coaches and other top professionals to China and vice versa.

The contract was signed by the National Sports Academy president Prof. Dr. Pencho Geshev and the founder of Campionia Georgi Zahariev.

The founder of Campionia, Georgi Zahariev, took part of a two day course, organized by the Professional Football Scouts Association. Main lecturers were Gerry Luczka and David Hobson. Gerry is a Manchester United scout, while David has been in charge of the Youth development program at Old Trafford for 12 years.

Some of the topics discussed during the course were:

At the end of the course all participants took a test and the people who managed to pass it were accepted as members of the Professional Football Scouts Association. 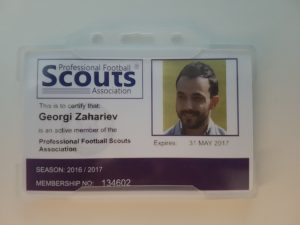